Virtual Tour of the Jim Crow Museum and Panel

You are invited by the Ohio State Alumni Club of Western Michigan to attend a virtual tour of the Jim Crow Museum of Racist Memorabilia – Teaching Tolerance with Objects of Intolerance on Wednesday, January 25 at 3:30 p.m. Pacific. Located at Ferris State University in Big Rapids, Michigan, the museum is the nation’s largest publicly accessible collection of artifacts of intolerance. It contextualizes the dreadful impact of Jim Crow laws and customs and uses objects of intolerance to teach tolerance and promote a more just society. The virtual tour is an opportunity to discover many of the highlights of the museum’s collection. The tour and panel discussion will be conducted by Dr. David Pilgrim, Director and Founder; Ms. Cyndi Tiedt, Collections Manager; and Mr. Franklin Hughes, Multi-Media Specialist. Dr. Pilgrim is a two-time degree holder from Ohio State. 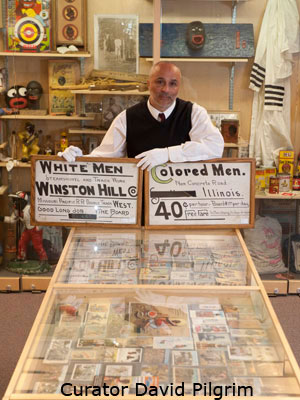 Cyndi Tiedt is the Collections Manager of the Jim Crow Museum at Ferris State University. She is primarily responsible for caring for the Museum’s permanent collection of 20,000 artifacts. Her duties include the documentation and information management of the collection, implementing preventive conservation methods, developing the Museum’s digital strategy, and facilitating educational programming. She holds a master’s degree in Information Science focusing on collections management, preservation, and digital collections. She is trained as a museum professional, information scientist, and archaeologist. Before working at the Jim Crow Museum, Cyndi has worked at museums in an educational and collections capacity in Canada and Australia. Cyndi has been with Ferris since July 2017.

Dr. David Pilgrim is a public speaker and one of this country’s leading experts on issues relating to multiculturalism, diversity, and race relations. He has been interviewed by National Public Radio, Time magazine, the British Broadcasting Corporation, and dozens of newspapers, including the New York Times, Washington Post, Boston Globe, Chicago Tribune, and the Los Angeles Times. He is best known as the founder and curator of the Jim Crow Museum, an over 20,000-piece collection of race-based artifacts, located at Ferris State University. The museum uses objects of intolerance to teach tolerance and promote social justice.

Pilgrim is the author of several books, including Understanding Jim Crow (PM Press, 2015), and Watermelons, Nooses, and Straight Razors (PM Press, 2017). His writings, many found on the museum’s web site, are used by scholars, students, and civil rights workers to better understand historical and contemporary expressions of racism. The web site has been linked to hundreds of sites and has resulted in Pilgrim being invited to deliver public lectures at dozens of institutions, including Stanford University, Spring Arbor College, the University of Michigan, Smith College, and the University of North Carolina.

Pilgrim is an applied sociologist with a doctorate from The Ohio State University. He believes that racism can be objectively studied and creatively assailed. In 2004, he produced, with Clayton Rye, the documentary Jim Crow’s Museum to explain his approach to battling racism. The film won several awards including Best Documentary at the 2004 Flint Film Festival. Marc Haefele, a film critic at the Los Angeles Daily News called the documentary, a “grisly low-key masterpiece.” Jim Crow’s Museum is shown nationally on affiliates of the Public Broadcasting Service (PBS). Pilgrim and Carrie Weis created two traveling exhibitions to take the Jim Crow Museum’s lessons to a national audience. Hateful Things is a 39-unit traveling exhibition of objects found in the Jim Crow Museum. The objects are accompanied by didactic panels that place the images in the proper historical context–offering insight into their past and present popularity–and effects. Hateful Things has traveled to many institutions, including Aquinas College, Delta College, Utah Valley State College, and the Black Holocaust Museum. Pilgrim and Weis, in 2005, created a second traveling exhibition, Them: Images of Separation, a 35-unit exhibition that deals with the stereotyping of women, poor Whites, gay people, Jewish Americans, Native Americans, Mexican Americans, African Americans, and Asian Americans-and others. Pilgrim believes that Reverend Martin Luther King, Jr. was right when he said, “Injustice anywhere is a threat to justice everywhere.” Diversity is more than a Black-white issue; more, indeed, than a racial issue.

In 2006, Pilgrim served as a consultant to Will Smith (directorial debut) for the UPN television show, All Of Us. Mr. Smith wanted to make sure that the episode-called “The N-Word”-dealt with issues of race and racism in a non-stereotypical fashion.

Pilgrim challenges audiences to think deeply about diversity and race relations. He is a Ferris State University Distinguished Teacher. Pilgrim has spent his adult life using objects of intolerance to teach tolerance. It works. His goal is to get people talking about diversity and race relations in meaningful ways-and then, to go and do something positive.

Dr. Pilgrim is a two-time graduate of The Ohio State University, receiving his masters from in 1982 and his doctorate degree in 1984.

Countdown to Ohio State Vs. Michigan