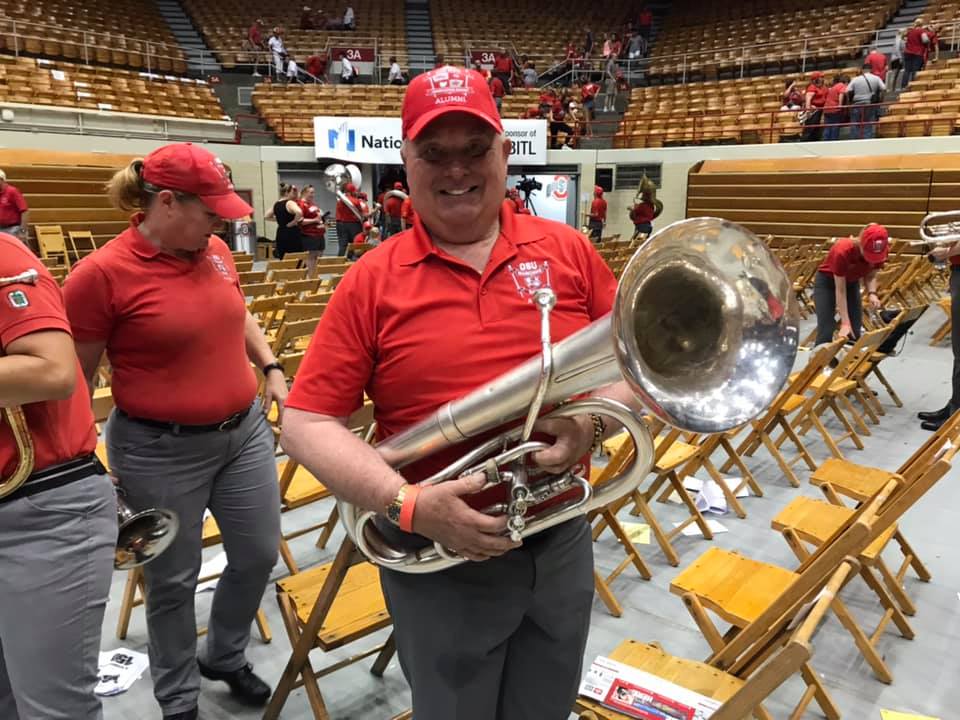 We are proud of our San Diego Buckeyes, especially those who pay it forward, so we would like to recognize Gary Rectenwald for his service to the community. Gary graduated from The Ohio State University with a bachelor’s degree in mathematics and computer science, a master’s degree in computer and information science, and an MBA in marketing and finance.

Gary was in the Ohio State Marching Band (TBDBITL) and played the Euphonium from 1967 – 1975 (including five Rose Bowls). In some practices, he even played the tuba and dotted the “i” once. Gary was named “Most Valuable Bandsman” in 1993 and his photo is permanently on display in the stadium band room. Today, he still travels back to march with the TBDBITL Alumni to perform the incomparable quadruple Script Ohio!

Gary’s 20-year career in executive management for IBM led him to San Diego. He restarted the Ohio State Alumni Club of San Diego (OSUSD) and served as the club’s President from 1990 – 2002. During his tenure, OSUSD was designated as an “Outstanding Club” eight times and a “Gold Star” (top 5% of clubs) three times. He established OSUSD’s student scholarship fund in 1992, which was later renamed the “Gary M. Rectenwald Scholarship Fund of San Diego, California” in tribute to his many years of leadership in bringing San Diego Buckeyes together. The Ohio State University Alumni Association recognized Gary with the “Best Buckeye” award in 1994.

In 1999, Gary adopted a family of six children and two parents from war-torn Kosovo. His family still lives in San Diego County today. Read more about Gary and his family’s story in the “People in Your Neighborhood” column by the La Jolla Light: https://www.lajollalight.com/lifestyle/sd-cm-ljl-rectenwald-20181116-story.html.

Gary is currently the Executive Director of the Catholic Community Foundation of San Diego and serves on the Board of Directors for the Holiday Bowl. He is certainly a Buckeye for life!

Countdown to Ohio State Vs. Michigan

Please join us in a more than decade-long tradition of staffing a Big Ten Water Station at the Rock 'n' Roll Marathon on Sunday, June…